This is just the beginning of this page.  Lots of more information needs to be added.

Below are photos of original Porsche crests.  The Porsche crest changed over the years, and specifically it changed from application to application.  It also varied over the time of 356 production.  According to Mike Wilson (California), one of the manufacturers was Alois Rettenmaier GmbH und Co. K.G.  The "R" in the circle does not mean "Registered" as many think.
I need to ad more samples of original and reproduction crests for comparison.  Check back later.
The shot of the crest close up with a smooth black background is a photo I took of my horn button.  Notice the fine detail in the horses main.  This is normally the tell tale sign of an original horn button crest vs a reproduction one.

The hood handle crest is  from Miss April and is also original.  Miss April has the same enamel crests on the hubcaps.  Note the markings on the back side of these crests and also note the shape of the right leg of the letter R.  That leg is curved, not straight!
The text below is from the Porsche factory website.  This is in regards the first sketch, not the first badge.
Here you go:
The Porsche crest first appeared in late 1952 in the centre of the 356's steering wheel. Austrian engineer Franz Xaver Reimspress - who was also a talented graphic artist, and who had earlier created the famous Volkswagen logo - developed a heraldic coat of arms which linked the company firmly with its home city of Stuttgart. The 'rampant' (rearing) horse is the official symbol of the city; the red and black colours and antlers come from the coat of arms for the state of Wüttemberg-Hohenzollern, as it was then. It's thought that the idea for a Porsche crest came from Porsche's US importer, Max Hoffman, who suggested it to Ferry Porsche; in late 1954, the badge was integrated into the front bonnet handle, and from 1959, it was placed on the wheel hubs or caps. 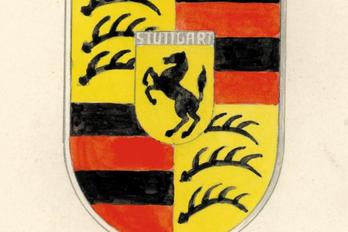 This animation below is obviously not an original crest.... but it's kinda fun!