How about the generator/fan belt shown at the top of the page??? There is another shot in the rotating pictures shown below.  I was able to make artwork to apply to brand new belts so that they closely resemble what the original ones looked like when they were new.  I have put one in my tool kit and one on the engine.  I also have some that are marked Continental for the 356A cars, and special ones for 2 piece engine case Pre-A cars.  Early 911's too.  Check out the Classifieds page for more information.

There are a lot of details to get correct for a Porsche 356 tool kit.  Correct Klein screwdrivers, not the10,000 volt ones that Porsche supplied after around mid 1968.   My kit also contains the 4 wrench set.  Sizes are shown below, and it contains the very hard to find 12/14 wrench that IS NOT in the 5 wrench set. One should note that in the 356 C owners manual, page 100, the tool kit is described as containing 4 wrenches along with a photo of the kit. The controversy is that some 356 owners claim their C car came with a 5 wrench set. Well, 5 wrench sets were provided in 1965, but in the 912. Could some have been put in a 356 car? Who knows, but the 5 wrench set is more plentiful, as it was used throughout the 912 production. 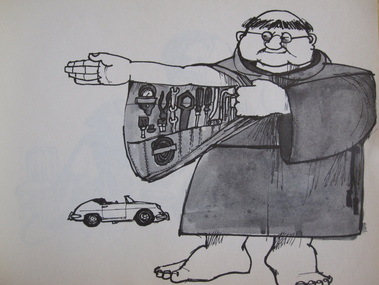 There are even more details- like the font of the word Germany on the wrenches, which was smaller in the 356 production era than in the 912 era, even though the DROP FORGED font is the same. The spark plug wrench for a 356 is 9" long, whereas 912's also had one, but longer. Also of some study is the pliers. Correct for 356 C cars are pliers with the fish skin cross hatch style handles, raised jaws at the cutting edge, and no manufacturers name. Note the lug wrench- It has a tail to it that is not on some other 19 MM lug wrenches.  Fan belts in the 356 C era were supplied by Phoenix.  Lastly, take a look at the Messko. Correct gauges are dual scale and made in Germany, not Switzerland like the later reproduction ones.  Also, look at the surface on the Messko gauge pouch.  The gray plastic is dimpled- not smooth, not cross-hatched.  This one is an original!!  Some of these gauges were supplied with leather pouches made by PRYM.  Those leather pouches were for cars prior to the 356 C.  The one I have is appropriate for Miss April.
Enjoy the pictures!

Porsche Fans getting together in the early days- wonder if they compared tool kits?
-bet the answer is "No"