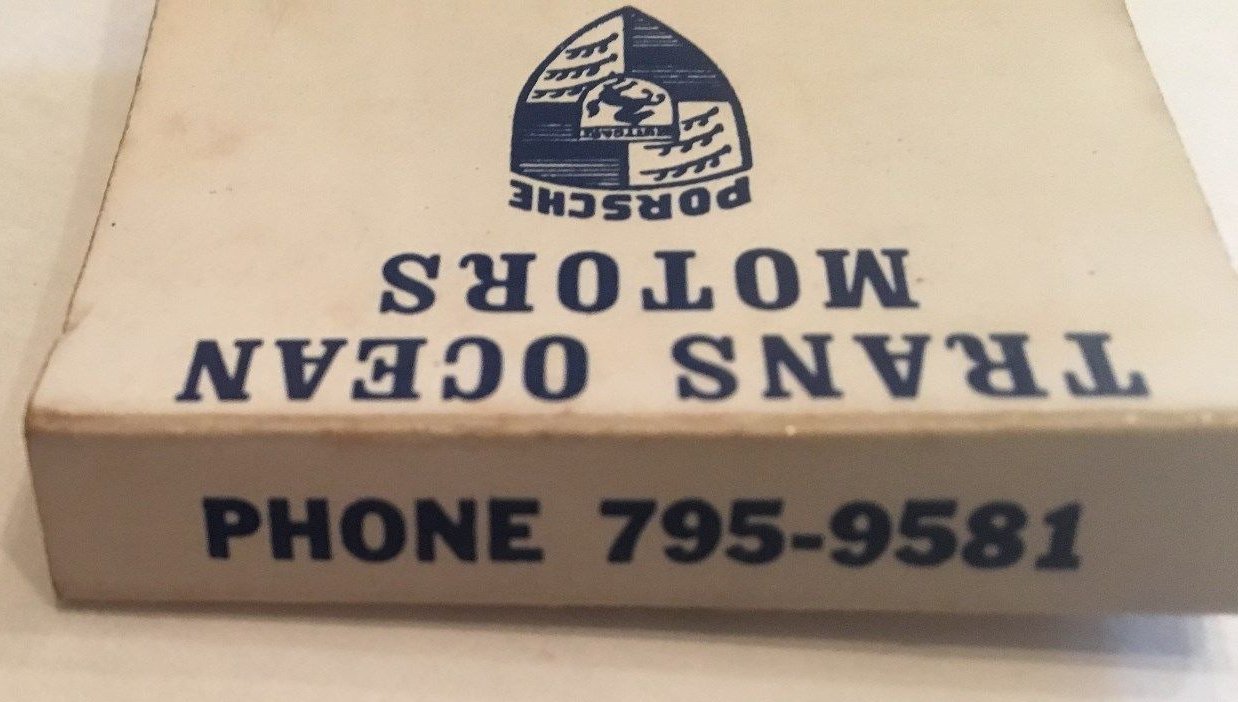 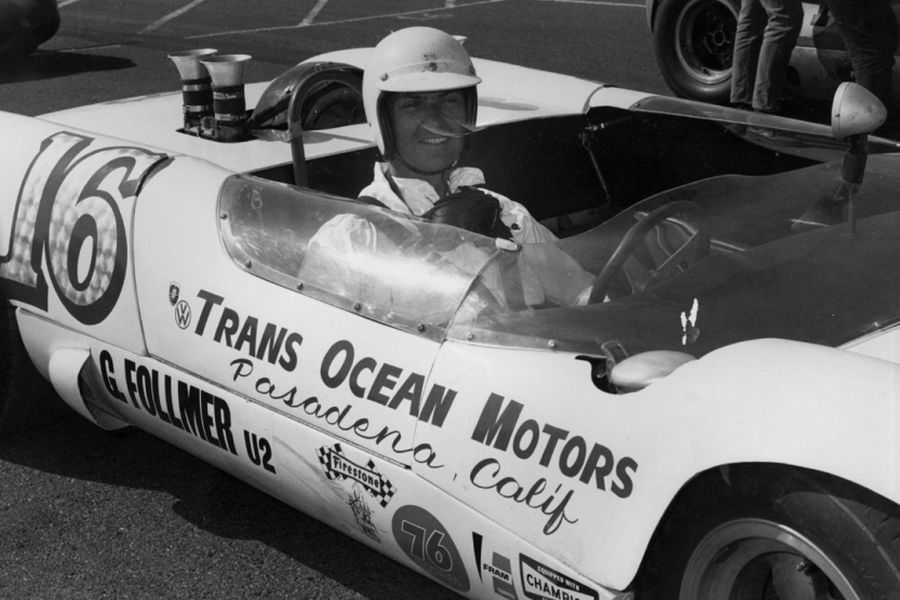 The original owner of Miss April shows on the Kardex.  It also shows his home address in Pasadena, which is very close to the PORSCHE dealer TRANS OCEAN MOTORS.  The car was later traded back into this dealer, where the second owner purchased her as a used car.  I have talked to the second owner to verify this.  The original purchase date was May 21, 1965.
Some confusion comes into play here because the Kardex shows the distributor/handler as Competition Motors.   This company had a dealership located in North Hollywood and later in Woodland Hills.  However, they also held the contract to be the distributor for all Southern California, Arizona and Nevada.  Under the leadership of John von Neumann, several PORSCHE dealerships were set up, and the cars were imported and sent to the dealers through them.  This is also confused somewhat by the name of the distributor/handler.  When von Neumann got the contract to be a distributor/handler, he started a company called PORSCHE Car Distributors, Inc.  It has the same Culver City address as Competition Motors.  The names seemed to be used somewhat interchangably when noted on the Kardex.  Afterall, the Kardex was not meant to track the car or provide exacting information on the build.  It was meant to track warranty work

A little about TRANS OCEAN MOTORS
The owner of TRANS OCEAN was Tom Nuckles.  Tom became friends with George Follmer, who raced with cars sponsored by the dealership.  George started out in a '59 Speedster, but mostly raced a Lotus- with PORSCHE 4 cam engine (above).​  Below he is driving a 904 (number 54) in the 12 hours of Sebring.  Tom had a young salesman working for him at the dealership by the name of Richard Wilson.  Rich later bought TRANS OCEAN from Tom and is still the owner today! 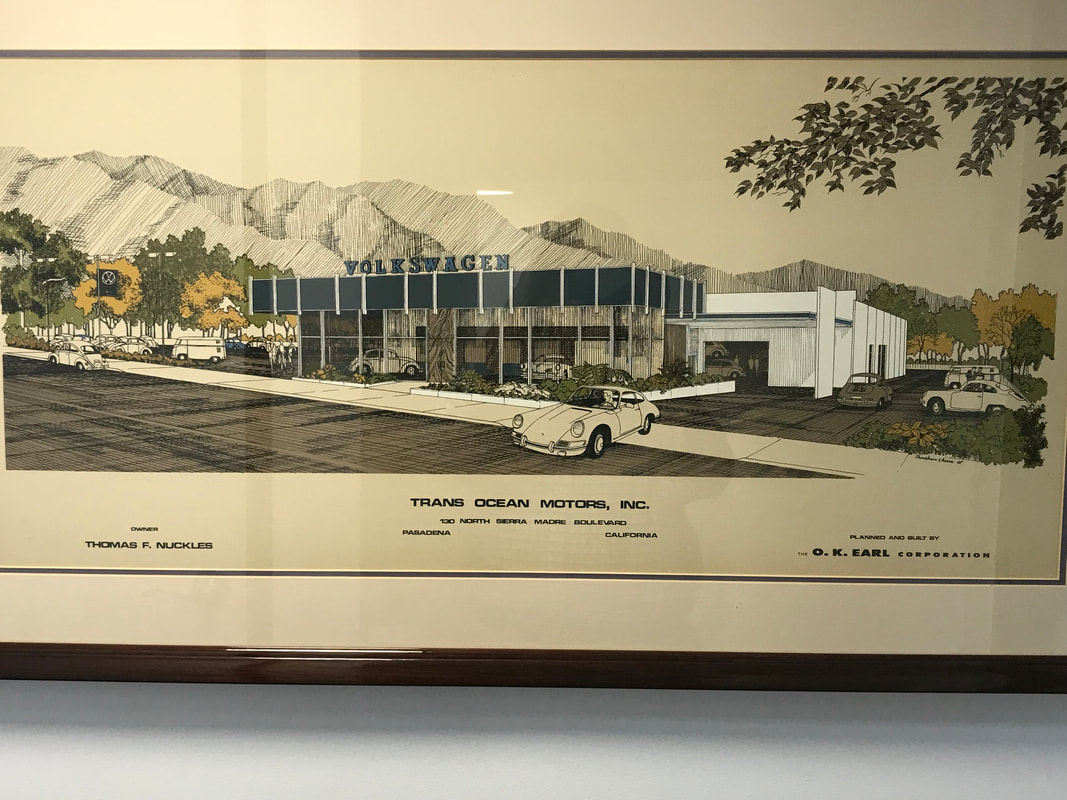 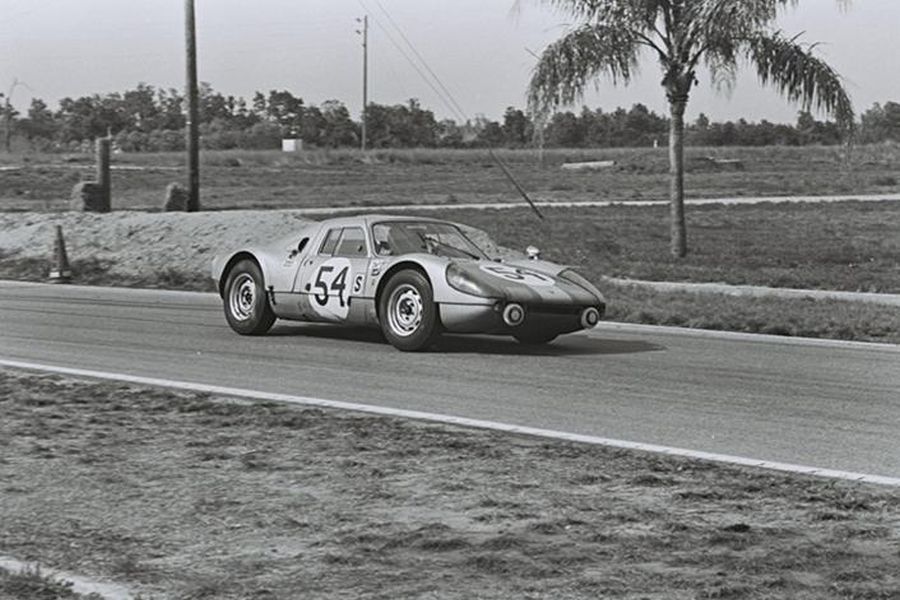 ​​In the end, PORSCHE built the car, Competition Motors was the "handler/distributor" who imported it, and the dealership who sold the car to the original owner was TRANS OCEAN MOTORS.
Although I do not have the documents to prove it for Miss April, below is a photo of the type of paperwork that was used for for a different PORSCHE in 1967. 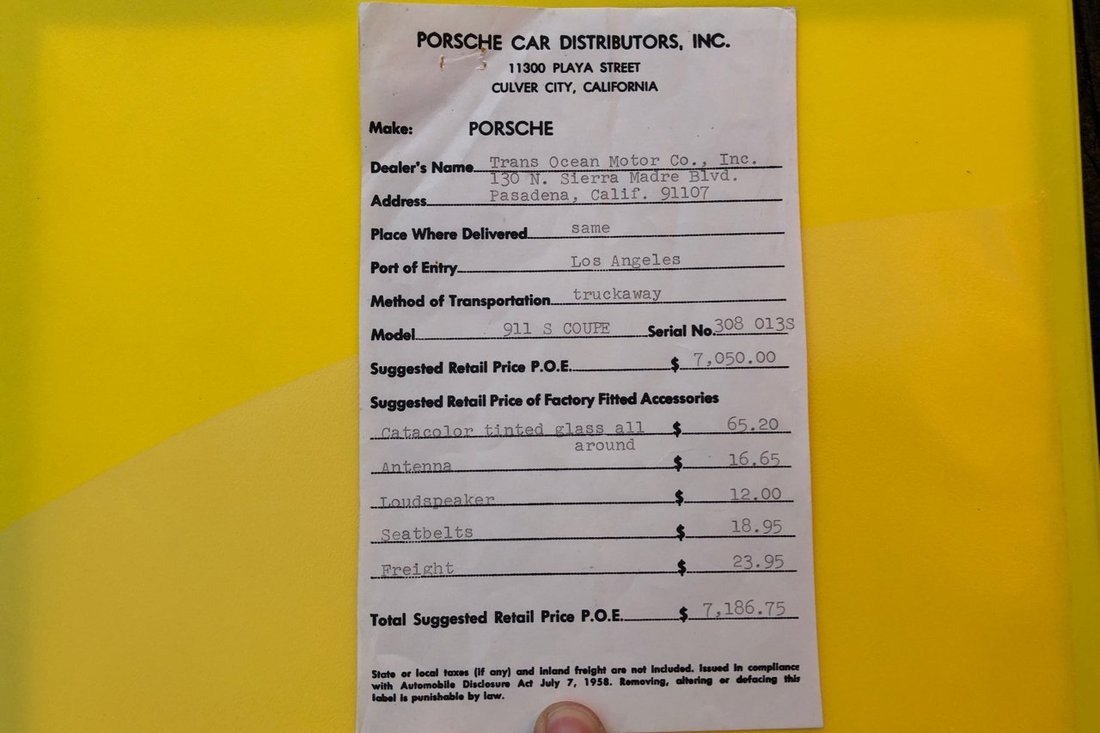 ​More on the famous Competition Motors
This company was a famous distributor/dealership, starting in North Hollywood and later at different locations.  The list of Hollywood celebrities buying their new PORSCHE cars is lead by the famous James Dean.  Given the iconic location that Miss April was purchased from, I thought I'd add some information on the history of Competition Motors.  Most of this information is taken from the internet, but believed to be accurate.  If any reader finds otherwise, please use the Contact Us page to give your feedback.
John von Neumann was born in 1921, the son of a Viennese surgeon. The family fled to the United States when the Nazis annexed Austria during the Anschluss of 1938. First arriving in New York, von Neumann was a frequent young visitor at Max Hoffman's import dealership before joining the U.S. Army as an intelligence specialist during WWII.
Post war Johnny moved to California and fell in love with hot-rods and all things automitive.  Initially he the team at Roger Barlow's International Motors, one of the largest car importers in the country.  After a while there, he opened his own sports car company- Competition Motors, in North Hollywood.  He also started racing for the competition and as a means of advertising.  Entrepreneur and race car enthusiast John (Johnny) von Neumann was an important catalyst for the popularity of imported, small cars in post WWII America.
In the 1950's von Neumann applied to PORSCHE for the right to distribute in America.  PORSCHE executives told him he must also agree to sell another German car (VW) if he wanted the distributorship.  He agreed, initially selling only a few hundred VW's,  but by 1963, he would sell over 20,000 VW's and outgrew his North Hollywood location.
In 1961 he started to have a new location engineered for company headquareters and 28,000 square feet for inventory.  This was eventually located in Culver City, California.  The inventory was estimated to hold 5 months sales on 13+ acres, and employeed 200 people!
The success was unparalleled in American automotive history.  In 1953 it was virtually unknown.  By 1962, he had opened 57 dealerships to which he supplied cars.  While many were VW, some were PORSCHE dealerships such as:  Jack McAfee, Vasek Polak, and Trans Ocean.
von Neumann and the PORSCHE 356 SL
Max Hoffmann imported some of the 11 PORSCHE 356 Gmund SL's to the USA.  One of these cars was sold to Johnny.  The car had competed in the 1951 Le Mans 24 hours with Auguste Veuillet and Edmond Mouche and took a class win.  John von Neumann made changes to the car, including the brakes and gears in the trans and later to get a competitive advantage he cut off the roof of the car (356/02-63).  More on that story here.
Enjoy the photos below.  Pretty great success for someone who started out tuning cars in a 2 car garage! 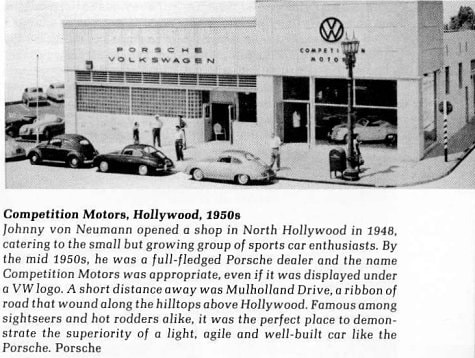 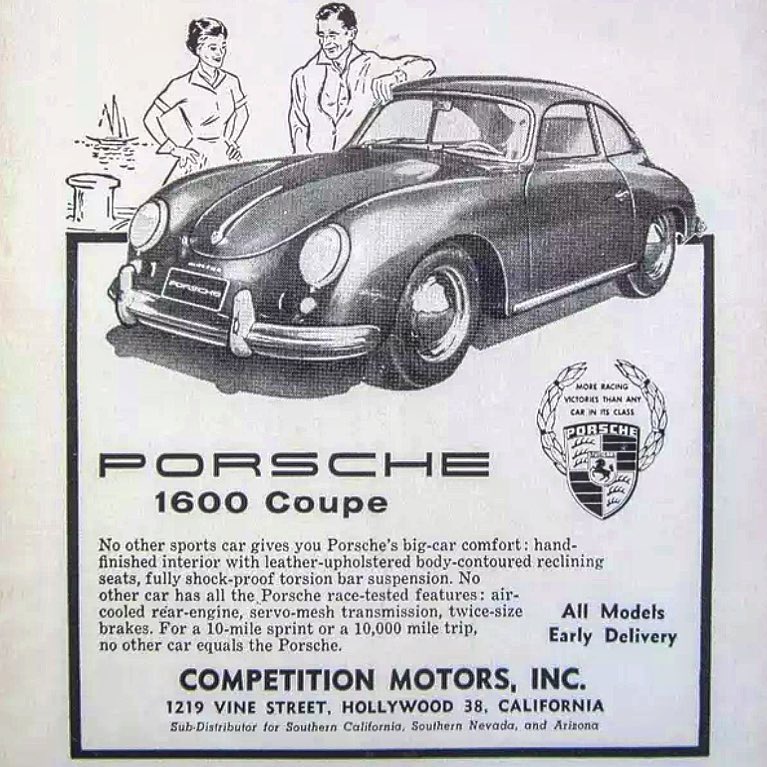 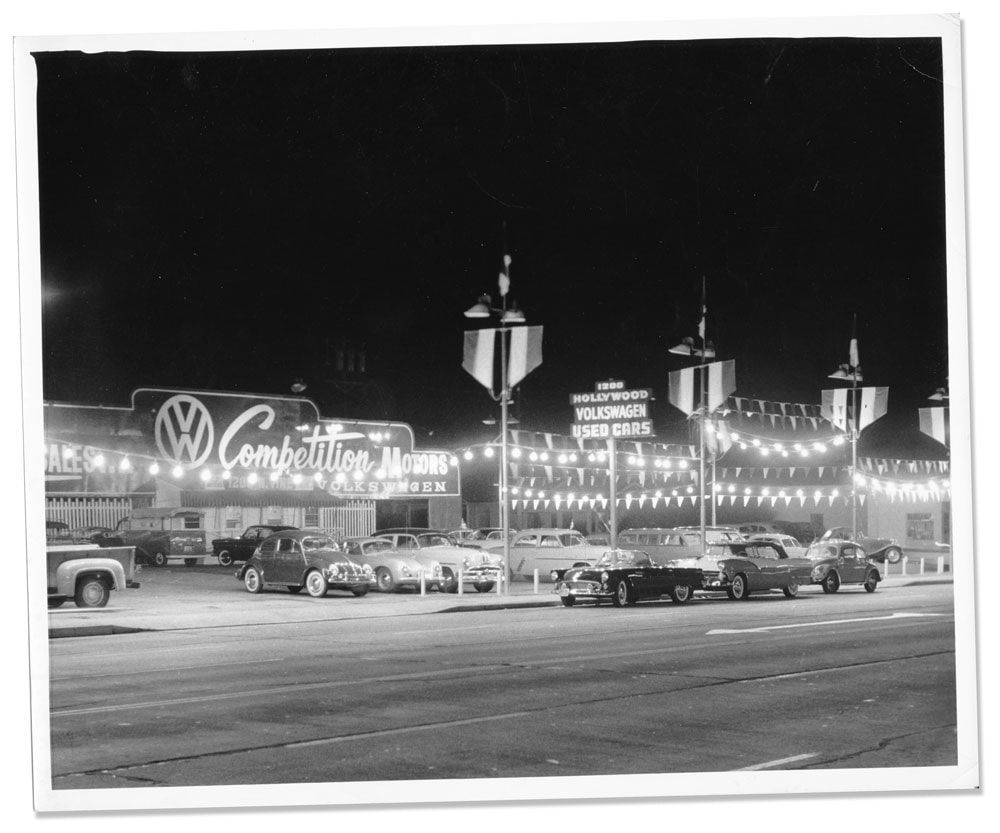 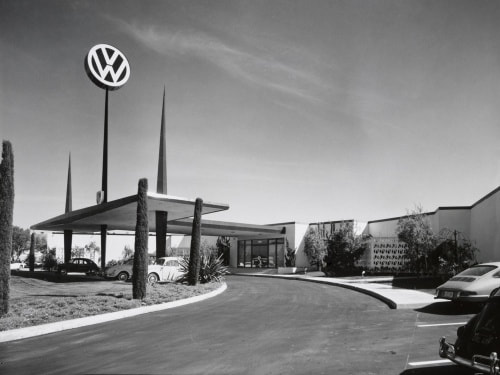 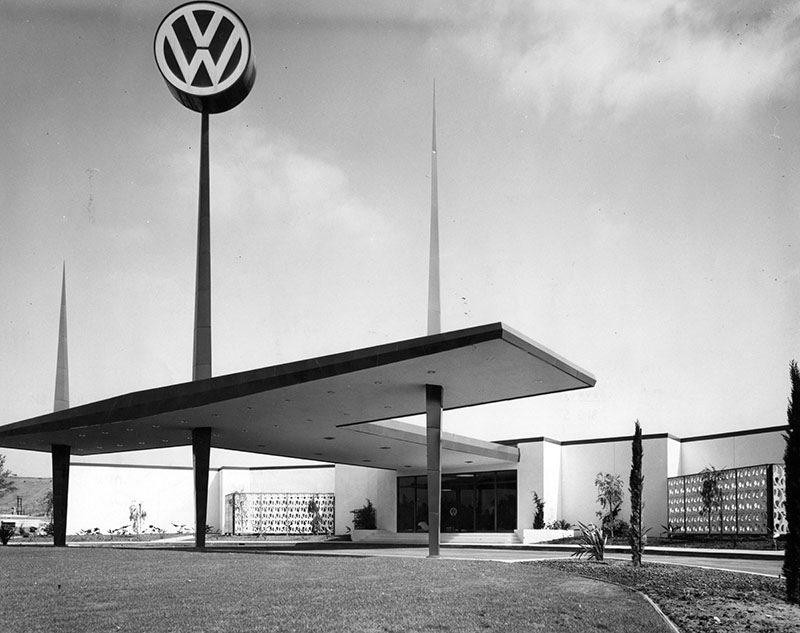 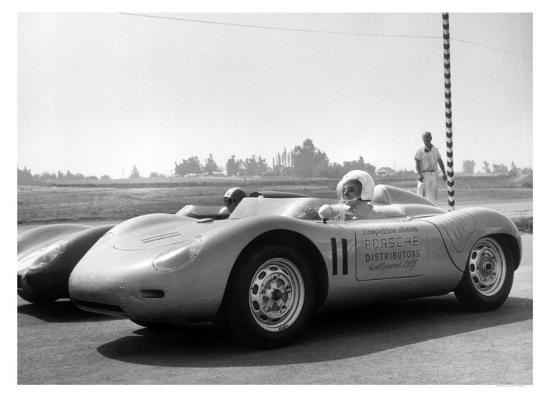 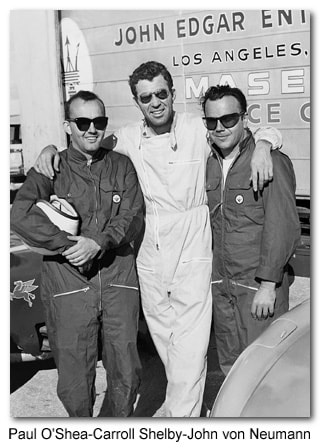 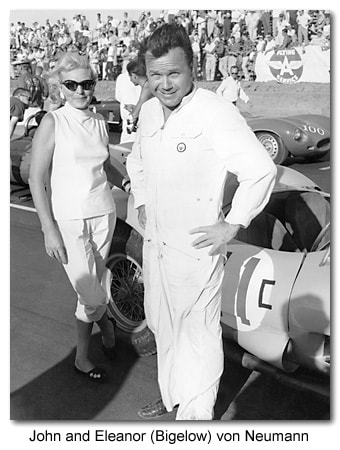 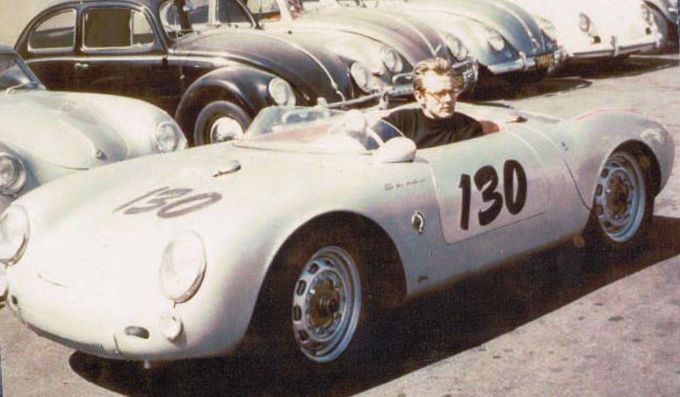